IN AN EMERGENCY CALL 999

16 Days of Activism against Gender-Based Violence

Today is the start of an annual international campaign spearheaded by the United Nations called ‘16 Days of Activism against Gender-Based Violence’, running from 25th November to 10th December 2020. This year marks the 8th anniversary of the Stalking Law Reform, adding stalking as a criminal offence.

Veritas Justice takes part in this campaign because stalking is a form of gender-based violence as women are more likely to be stalked than men; 1 in 5 women will be stalked at some point in their lifetime. Stalking is still misunderstood and under-reported crime but increases in campaigning and the training of front-line services are addressing the issues and more and more reports are being made.

In January 2020, Stalking Protection Orders (SPOs) were introduced in England & Wales to further protect victims of stalking. This new civil order allowed for greater control and thus greater protection; it’s intended to prevent a person from carrying out acts associated with stalking. SPOs are an additional tool for police, which intend to complement the existing legislation and promote early interventions when the defendant’s behaviour suggests stalking is occurring, but a police investigation is ongoing. Although a civil order, the criminal standard of proof will be applied. However, the breach of an order is a criminal offence carrying up to a 5-year custodial sentence. Sussex Police were the first force to successfully issue an SPO within days of the announcement and, to date, Sussex has the highest number of SPOs granted across the country.

Recognising the Signs of Stalking

If someone is scared about repeated and unwanted behaviour from another person, this might be stalking. Each action on its own might seem trivial, so you must look at the pattern of behaviour.

Is it all FOUR? 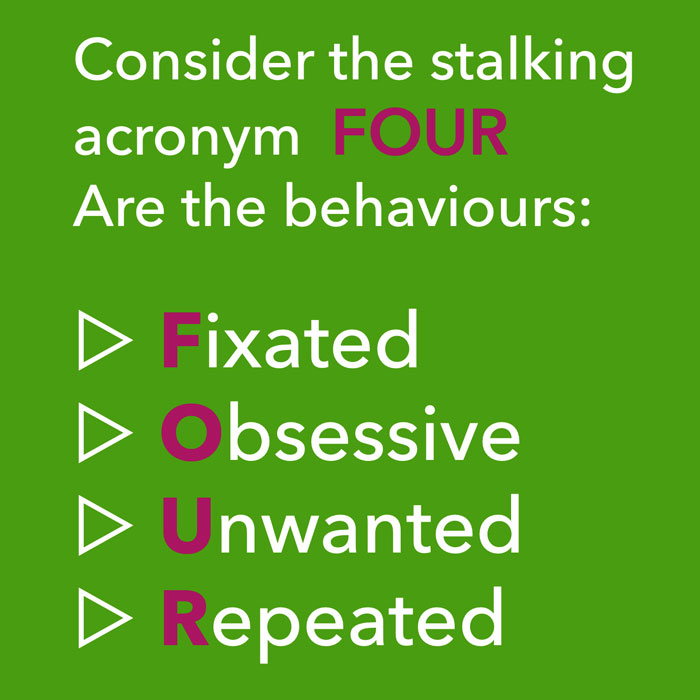 Stalking behaviour can often be identified within the workplace environment.

This may manifest itself in one of many ways, for example:

If someone you work with is afraid because of another person’s behaviour, it may be stalking.

The perpetrator may be:

We know that stalkers are still stalking during the COVID-19 pandemic, with intermittent lockdown measures, varying national tier levels and much reduced general contact. Our clients are telling us that their homes are not the places of safety and solace that many of us enjoy.

We have already seen a 75% increase in cyber and online stalking activity, which is currently the most common form of human interaction. Sadly, the negative impact of this form of fixated, obsessed and unwanted communication is still not fully appreciated by many.

Find out more about what to do if someone you know is being stalked by clicking here.

Veritas Justice is one of the services listed on Safe Space Sussex providing access to support for people when they are at their most vulnerable safespacesussex.org.uk

This website uses cookies to improve your experience while you navigate through the website. Out of these cookies, the cookies that are categorized as necessary are stored on your browser as they are essential for the working of basic functionalities of the website. We also use third-party cookies that help us analyze and understand how you use this website. These cookies will be stored in your browser only with your consent. You also have the option to opt-out of these cookies. But opting out of some of these cookies may have an effect on your browsing experience.
Necessary Always Enabled
Necessary cookies are absolutely essential for the website to function properly. This category only includes cookies that ensures basic functionalities and security features of the website. These cookies do not store any personal information.
Non-necessary
Any cookies that may not be particularly necessary for the website to function and is used specifically to collect user personal data via analytics, ads, other embedded contents are termed as non-necessary cookies. It is mandatory to procure user consent prior to running these cookies on your website.
SAVE & ACCEPT